The Battle For The Arab Spring 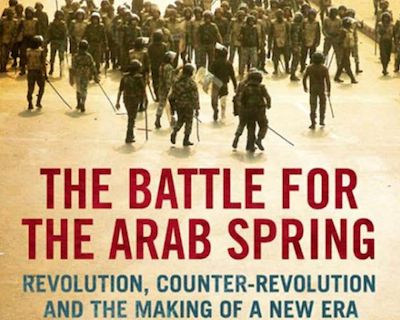 The Battle For The Arab Spring: Revolution, Counter-Revolution, & The Making Of A New Era is the first comprehensive account of last year's Arab Spring movement. The writers, Lin Noueihed and Alex Warren, systematically cover the revolutions in Tunisia and Egypt, the civil war in Libya, and the continuing oppression in Syria, providing a complete survey of the events across the Middle East. They also consider the broader conditions that fermented the uprisings, especially the empowerment created by satellite broadcasting, cellular networks, and social media. Finally, they analyse the potential repercussions of the paradigm shift in Arabian politics and society.

The Arab Spring also influenced citizens of other authoritarian regimes, such as China (where artists called for a Jasmine Revolution) and Russia (where demonstrators marched against Vladimir Putin's return to the presidency). (Thailand's 2010 massacre, in the year before the Arab Spring, was another example of a government using the military to suppress pro-democracy protesters.)
Categories: book reviews, politics
continued...