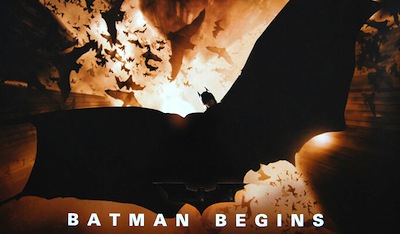 Batman Begins is the first of Christopher Nolan's Batman trilogy. (It was followed by The Dark Knight and the forthcoming The Dark Knight Rises.) Batman and Batman Returns portrayed Gotham City through Tim Burton's Gothic vision, though Nolan's Gotham is closer to the urban decay of Blade Runner.

Nolan's best films, Memento and Inception, both have unconventional narrative structures, though after some early flashbacks Batman Begins is essentially a linear action movie. The flashbacks are part of a drawn-out origin story, with Nolan apparently using his first Batman film to establish the character in preparation for The Dark Knight.

Though Batman has no super powers (like Iron Man and The Red Eagle), he does benefit from gadgets supplied by Lucius Fox, who has the same function as James Bond's Q. (He also has Wayne Tower, like Iron Man's Stark Tower, though Wayne's playboy persona is a facade whereas Stark's isn't.) Michael Caine, as Alfred the butler, gives the first of several performances in Nolan's films (the others being The Prestige, Inception, and the Batman sequels).
Categories: film reviews
continued...