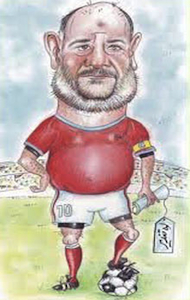 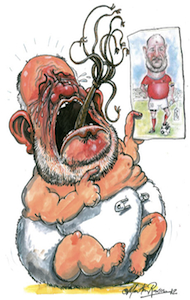 An Iranian cartoonist, Mahmud Shokraye, has been sentenced to twenty-five lashes after he drew a cartoon of politician Ahmad Lotfi Ashtiani as a footballer. The caricature was published by the newspaper Nameye Amir.

In solidarity with the cartoonist, and in protest at his barbaric sentence, Martin Rowson reproduced the original cartoon and drew a grotesque portrait of the politician as an obese, wailing baby. Rowson's cartoon was published by The Guardian in the UK on Thursday.
Categories: censorship, media, politics
continued...