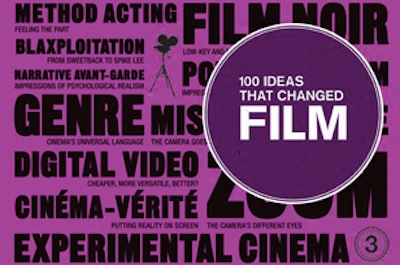 100 Ideas That Changed Film, written by David Parkinson and published by Laurence King, is a guide to 100 significant technical and stylistic innovations from the Cinematographe to CGI. Each entry is allocated a single page of text accompanied by a full-page, full-colour photograph.

It's refreshing to see film-theory concepts like mise-en-scene, and structural elements such as flashbacks, given equal coverage alongside more mainstream entries. This will hopefully promote an awareness of film grammar (close-ups, zooms, continuity editing, etc.) and the historical development of the medium. Conversely, the chapters on major topics such as film noir are inevitably condensed.

The book, with its extensive and well-chosen illustrations, provides a practical and accessible introduction to film studies. It's a useful supplement to film-history surveys such as Cinema: The Whole Story and film-analysis primers like How To Read A Film.
Categories: book reviews
continued...