Strangers On A Train (preview) 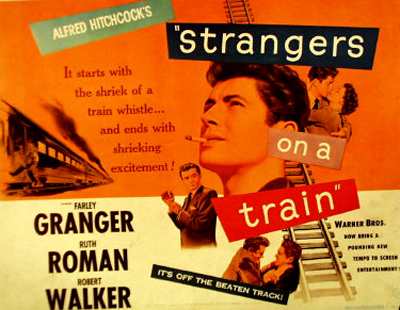 Strangers On A Train, one of Alfred Hitchcock's greatest films, was previewed in a form that's slightly different from the final release version. The preview version is sometimes mistakenly described as the British version, though the film's final American version was the only one shown on general release.

Hollywood studios routinely modify films after they are previewed, though the preview versions are seldom released commercially. The Big Sleep, My Darling Clementine, and Blade Runner are notable exceptions.

There are relatively few differences between the two versions. One rather superfluous sequence from the preview - in which Bruno and Guy order food - was shortened in the final version, to reduce the overall running time. Also, the build-up to Guy entering Bruno's father's room is more suspenseful in the preview version: a brief additional sequence, with shadowy lighting and ominous music, misdirects the audience by implying that Guy actually intends to murder Bruno's father.

The film's ending represents the most significant alteration. The preview version ends rather blandly, with Guy's telephone call to his fiance; the final version inserted a new coda in which Guy is recognised by a vicar on a train, a more ironic and amusing ending.