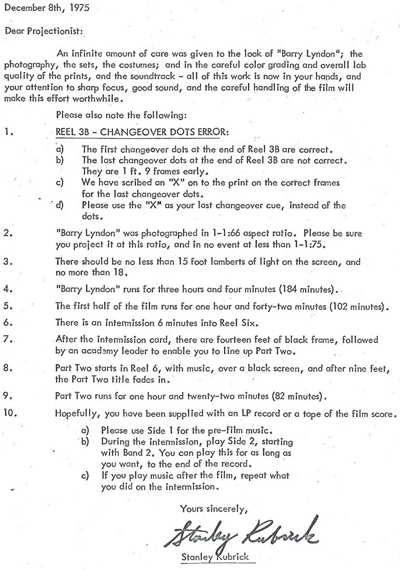 Whenever Stanley Kubrick's films are released on video, their aspect ratios always provoke intense debate. Most recently, the Warner blu-ray release of Barry Lyndon, Kubrick's exquisite period drama, has attracted criticism because it's framed at 1.78:1 whereas the film's original theatrical ratio was 1.66:1.

1.78:1 corresponds to the ratio of current high-definition widescreen TVs, thus the 1.66:1 image has been horizontally cropped so that the blu-ray image perfectly fits an HD-TV screen. Presumably, the studio felt that viewers would not tolerate the black 'letterbox' bars across their TV screens required for a 1.66:1 image. With similar reasoning, Barry Lyndon's original mono soundtrack has been remixed in 5.1 Dolby Digital on blu-ray, to accommodate contemporary multi-channel home-theatre systems.

Warner claims that the 1.78:1 ratio is in accordance with Kubrick's wishes for Barry Lyndon (thus apparently dismissing its own previous 1.66:1 laserdisc and DVD releases). Kubrick's assistant Leon Vitali told blogger Glenn Kenny categorically that Barry Lyndon's ratio had always been 1.77:1, and that it had never been released at 1.66:1, though this is clearly incorrect as its theatrical, laserdisc, and DVD releases were all 1.66:1. It appears, unfortunately, that Vitali is making these revisionist statements in order to justify Warner's commercial decision to reformat Kubrick's films to 1.78:1.

Kenny tracked down a letter to cinema projectionists in which Kubrick specifies the 1.66:1 theatrical ratio. Surprisingly, Vitali responded to this by insisting that Kubrick had always preferred 1.77:1, despite clear evidence to the contrary. 1.77:1 is a digital TV ratio, not an analogue theatrical ratio, thus it is practically impossible that Kubrick ever considered it for Barry Lyndon.

Kubrick's early, independent films Fear & Desire and Killer's Kiss were released in the Academy ratio, though he later favoured 1.66:1 for The Killing, Paths Of Glory, A Clockwork Orange, and Barry Lyndon. Lolita and Dr Strangelove were released with variable aspect ratios, with individual shots alternating between Academy and 1.66:1. His epics Spartacus and 2001: A Space Odyssey were premiered in 70mm at 2.21:1. His later films The Shining, Full Metal Jacket, and Eyes Wide Shut were projected at 1.85:1 and released on video at 1.33:1 as per Kubrick's wishes.

Since Kubrick's death, Warner has released four Kubrick collections on DVD. The first Stanley Kubrick Collection, released in 1999, used the versions Kubrick had previously approved for VHS and laserdisc, and thus conformed to Kubrick's specifications. However, when Warner released the second Stanley Kubrick Collection on DVD in 2001, some of the original mono soundtracks were retrofitted into 5.1 Dolby Digital. For the third (Director's Series, 2007) and fourth (Limited Edition Collection, 2011) Warner collections, most films were cropped to 1.78:1 in addition to the 5.1 remixes.

Reformatting films to accommodate domestic audio-visual technology is hardly a new practice. All films are at least slightly cropped for television and video, as the original CRT TV aspect ratio was 1.33:1 whereas the conventional Academy film format was 1.37:1. Widescreen films were often pan-and-scanned on VHS and VCD to fit CRT TV screens. The contemporary high-definition widescreen TV ratio 1.78:1 does not quite match the standard theatrical widescreen ratio 1.85:1, thus 1.85:1 films are routinely cropped to 1.78:1 for DVD and blu-ray release.

The 1.37:1 Academy 35mm format was adopted as an industry standard soon after sound technology had become established in Hollywood. This format persisted, with very few exceptions (such as The Big Trail, in 70mm) until the 1950s, when Cinerama launched the widescreen revolution. The anamorphic 35mm widescreen format then became standardised at 2.35:1. Non-anamorphic 35mm films were projected at either 1.66:1, 1.75:1, or 1.85:1 aspect ratios. Today, 1.85:1 has become the standard non-anamorphic format, and 2.35:1 remains the standard anamorphic widescreen format.

(Kubrick's "Dear Projectionists..." letter has a reliable provenance, and it's consistent with similar correspondence I've seen at the Stanley Kubrick Archive and elsewhere. I also own an original Kubrick document: a signed Christmas card.)
Categories: Stanley Kubrick
continued...