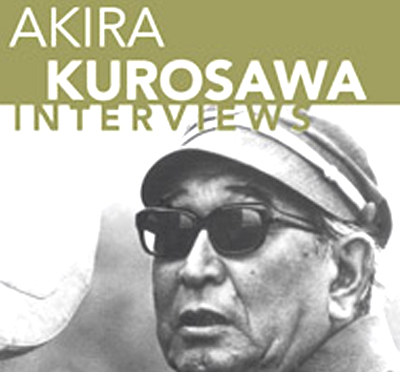 Akira Kurosawa: Interviews, edited by Bert Cardullo, is part of the Conversations With Filmmakers anthology series. Being a Kubrick completist, I also have Stanley Kubrick: Interviews from the same series. However, I generally prefer the earlier Directors On Directors series, which consists of in-depth, book-length Q&As rather than anthologies of shorter, sometimes repetitive interviews.

The volume on Kurosawa (whose 100 Years Retrospective finished in Bangkok yesterday) is most valuable for its reprint of Donald Richie's interview A Personal Record, which was first published in 1960 and is otherwise unavailable. (Richie's other Kurosawa interview, Kurosawa On Kurosawa, is not included, though it was partially reprinted by Sight & Sound magazine last year.)

The longest text in the anthology is a New Yorker profile from 1981 that seems more observational than interrogative: the writer describes, sometimes in oddly minute detail, what Kurosawa did during a five-day visit to New York. The interviews are almost exclusively from American publications, thus translations of Japanese press interviews would have been fascinating additions. Also, there are no early, pre-Rashomon, interviews, though Kurosawa covered this period in his own book, Something Like An Autobiography.
Categories: book reviews
continued...