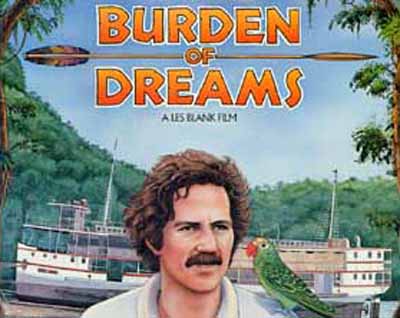 Burden Of Dreams, directed by Les Blank, documents the making of Werner Herzog's Fitzcarralo. It's one of the very best making-of documentaries, perhaps second only to Hearts Of Darkness, Eleanor Coppola's documentary about the making of Apocalypse Now.

There are several parallels between Fitzcarraldo and Apocalypse Now, which are exposed by the two respective documentaries. Both films were made on location in tropical jungles, both suffered significant logistical problems and lengthy delays, both had to replace their leading actors, and both feature a central character leaving civilisation behind on an upriver journey.

Burden Of Dreams reveals how Herzog and his team of labourers struggled to pull a ship over a hill, and how this and other obstacles almost derailed the film's production. Fitzcarraldo's star, the temperamental Klaus Kinski, is only interviewed briefly, complaining that there is "no escape from this fucking stinking camp". Kinski's volatile temper is not revealed in Burden Of Dreams, though Herzog discusses Kinski in his own documentary My Best Fiend.

Even the usually intrepid Herzog seems burnt out by the production of Fitzcarraldo: "There is a lot of misery, but it is the same misery that is all around us. The trees are in misery and the birds are in misery. I don't think they sing, they just screech in pain". His monologue is accompanied, ironically, by beautiful images of jungle animals and insects.
Categories: film reviews
continued...