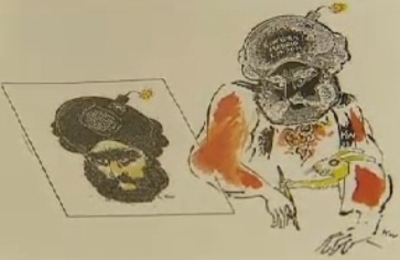 Manden Bag Stregen, a biography of Kurt Westergaard written by John Lykkegaard, includes a new version of Westergaard's infamous caricature of Mohammed with a bomb in his turban. Westergaard was interviewed by NRK television in Norway on 23rd October, and the programme includes footage of him drawing another new Mohammed cartoon, in which the bomb's fuse is replaced by a flower.

Westergaard's Mohammed cartoon was first published by Jyllands-Posten in 2005. He drew a new version of it for Bloody Cartoons in 2007.
Categories: blasphemy, book reviews, censorship, media