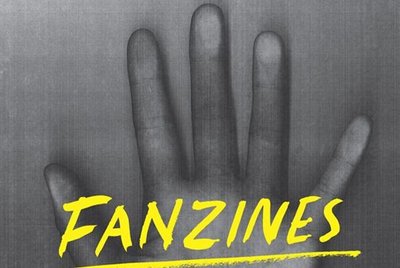 Fanzines, written by Teal Triggs and published by Thames & Hudson, is a survey of self-published zines from their origins in the 1970s to contemporary e-zines. As zines are frequently radical and alternative, the book also acts as a visual historiography of alt.culture, from Punk to post-feminism.

In their form and content, zines are similar to underground press titles such as Oz, though zines target niche audiences and are often written by individuals. The cottage-industry aspect of the format is evident in both zine production and distribution: zines are typically photocopied and stapled, promoted via classified advertising (or, until 1998, listed in Factsheet Five), and sold by mail order. Whereas early zines (such as Sniffin' Glue, featured in 100 Years Of Magazine Covers) were handwritten or typed on manual typewriters, more recent titles are produced via desktop publishing or published online.

I have a personal interest in zines, having written several of them in the 1990s: a monthly Madonna fanzine (called, incredibly unimaginatively, Madonna Monthly) and a cult-film zine (Disturbed). Of course, blogging and print-on-demand now provide further opportunities for self-published personal expression, and Fanzines might therefore be a timely archive of an endangered medium.
Categories: book reviews, media
continued...