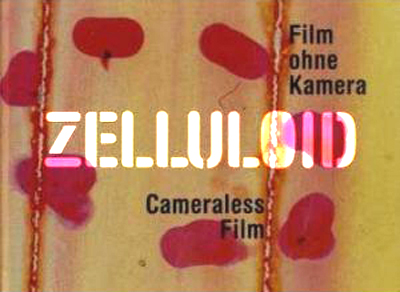 The exhibition catalogue Zelluloid: Cameraless Film, edited by Esther Schlicht and Max Hollein, profiles twenty directors who have made films without the use of a camera. In such films, each frame of celluloid becomes an artist's canvas, to be scratched, painted on, appliqued, or otherwise manipulated by the director. The films examined in Zelluloid, including A Colour Box (Len Lye) and Mothlight (Stan Brakhage), have previously been tangentially discussed in the broader contexts of art cinema and underground films, though Zelluloid is the first specific study of cameraless films.

Being largely abstract and experimental, these films remain on the extreme margins of cinema, though physical manipulation of celluloid occurs even in mainstream commercial filmmaking. The earliest 'colour' films, for example, were created by hand-painting black-and-white negatives; scratches on the negative were used as special effects in The War Of The Worlds; and Orson Welles famously distressed the Citizen Kane negative by rubbing it on the floor.
Categories: art exhibitions, book reviews
continued...