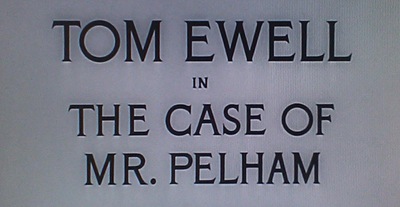 The Case Of Mr Pelham, from the first season of Alfred Hitchcock Presents, was originally broadcast on 4th December 1955. Like Revenge and Breakdown, it was directed by Hitchcock himself. The star, Tom Ewell, is most famous as the male lead in The Seven-Year Itch.

Ewell plays Mr Pelham, a nondescript 'everyman' character, who apparently has a double who stays at his apartment and works at his office when he is not there. Pelham initially suspects that he is paranoid, or even schizophrenic, though his doppelganger's presence becomes increasingly pervasive, and the plot sometimes feels like an existential Twilight Zone episode.

Hitchcock's point seems to be that men like Pelham are so bland that they are easy to impersonate. In fact, Pelham's double is more productive, witty, and confident than Pelham himself. Doubles were also a major element of Strangers On A Train, and the themes of fraud, impersonation, and paranoia were subsequently developed in Vertigo.
Categories: Alfred Hitchcock, film reviews, media
continued...