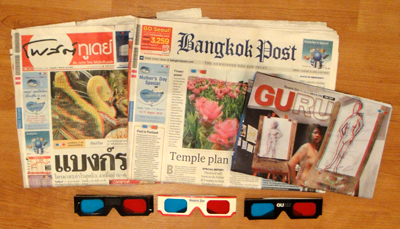 Today, two Thai newspapers have been published with selected content in 3D. Post Today and the Bangkok Post each have a handful of 3D photographs, some of which are quite striking (particularly the larger images in Post Today). Guru, the magazine distributed with the Bangkok Post, has a 3D cover. 1950s-style 3D glasses are included with each publication.

The Bangkok Post has also printed an extra supplement, Our Pride, featuring impressive 3D images on every page, though I'm not sure how Apichatpong feels about the 3D stills from his film Uncle Boonmee!

Of course, today's 3D issues are quite gimmicky (especially Guru, with a nude woman in 3D on its cover yet no further 3D content inside), jumping on the same bandwagon as 3D films such as Avatar (and, most recently, Toy Story). But they are also (like the expanded Bangkok Post Sunday) another demonstration of the Post's commitment to additional content, in contrast to the chronic under-investment of its rival The Nation.
Categories: media, Thailand
continued...