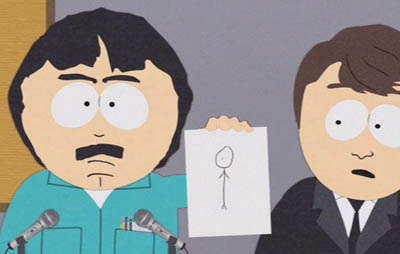 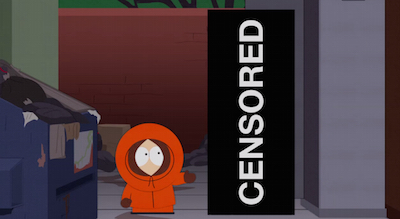 South Park has again provoked controversy, by featuring censored depictions of Mohammed, in a two-part storyline which also featured a litigious Tom Cruise. In the 200th episode, broadcast on 14th April, Cruise threatened to sue South Park unless Mohammed was shown uncensored.

In response to the lawsuit, Mohammed was seen wearing a bear costume, and a stick-figure "sketch of what Mohammed could look like today" was also shown. [Charlie Hebdo published a more tasteless 'Mohammed today' cartoon in 2006.] Mohammed's other appearances in the episode, as one of the Super Best Friends league of divinities, were censored, though the other deities (including a cocaine-snorting Buddha) were uncensored.

In the 201st episode, broadcast today, Mohammed reappeared, though his image was censored and his name was bleeped out by Comedy Central. Mohammed was also censored from two South Park episodes in 2006 (Cartoon Wars I-II), though he appeared briefly in the show's sixth-season opening titles and prominently in the 2001 episode Super Best Friends.