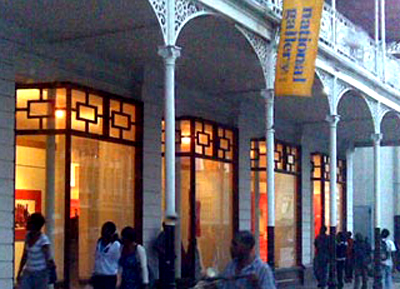 Zimbabwean artist Owen Maseko has been released on bail, after spending four nights in jail following his arrest on 25th March. Maseko's exhibition at Zimbabwe's National Gallery in Bulawayo has been closed, and the police have covered the gallery's windows with newspapers to prevent the twelve paintings and three installations from being seen.

Maseko's exhibition, titled Sibathontisele, is a direct attack on President Robert Mugabe, and a commentary on the Gukurahundi massacres carried out on Mugabe's orders in the 1980s. Sibathontisele is the second anti-Mugabe exhibition to be closed in Zimbabwe in the past few weeks, following the closure of the Reflections exhibition in Harare.