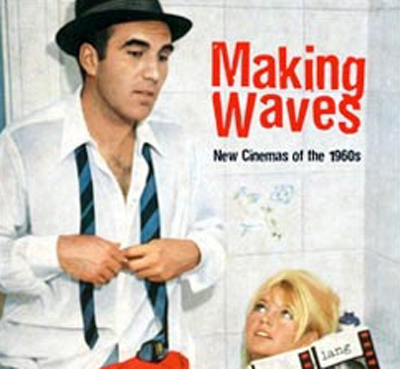 Making Waves: New Cinemas Of The 1960s is Geoffrey Nowell-Smith's account of cinema's various New Wave movements, including those of Britain, France, Germany, Brazil, and Czechoslovakia. The book's focus is almost exclusively European, thus there is no discussion of New Hollywood or the new cinemas of Japan, Yugoslavia, or Hungary. Nowell-Smith is the editor of the excellent The Oxford History Of World Cinema.

A chapter on censorship includes Dusan Makavejev and Vilgot Sjoman - yet not Andy Warhol's Flesh, which was confiscated by British police. This chapter ends with Salo and Empire Of The Senses, which, though fascinating, really belong to a later era.

There are also concise surveys of film criticism (principally Cahiers Du Cinema) and technology (colour, widescreen, and the zoom lens). Due to the lack of American coverage, critics Jonas Mekas and Andrew Sarris are excluded. A footnote in the latter essay makes the odd assertion that black-and-white productions of the 1960s were "retarded films".

The highlight is the historical section, titled Movements, with chapters on British, French, Czech, and Latin American cinemas which succinctly cover all the bases. This section also includes a less comprehensive chapter on Italian cinema, which omits Mario Bava and Sergio Leone.
Categories: book reviews
continued...