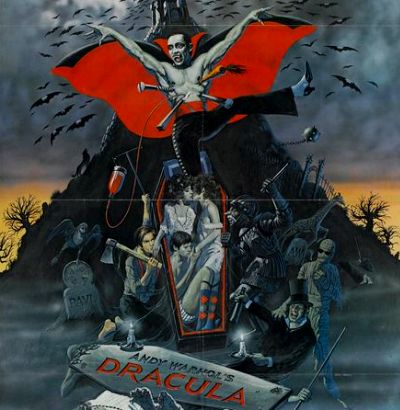 Blood For Dracula was filmed by Paul Morrissey back-to-back with his Flesh For Frankenstein. (Antonio Margheriti is sometimes cited as a co-director with Morrissey, though the extent of his contribution is unclear.)

The two films are very similar: both star Udo Kier and a cast of other non-native English speakers concentrating on their lines so much that they forget to emote, both feature the incongruous Joe Dallesandro, and both are Gothic melodramas which culminate in campy violence. In both films, Dallesandro appears out of place not only because of his beefcake physique and American accent but also due to the attitudes of his characters. In Blood For Dracula, in contrast to the aristocratic lineage of every other main character, he plays a worker who hopes for a Communist revolution, adding the theme of class conflict to the traditional Dracula story.

Blood For Dracula is notable for the cameo roles played by two acclaimed directors. Roman Polanski (director of Chinatown) is great as a labourer playing cards in a tavern, though Vittorio de Sica (director of Bicycle Thieves) is almost incomprehensible as a down-on-his-luck aristocrat.
Categories: film reviews
continued...