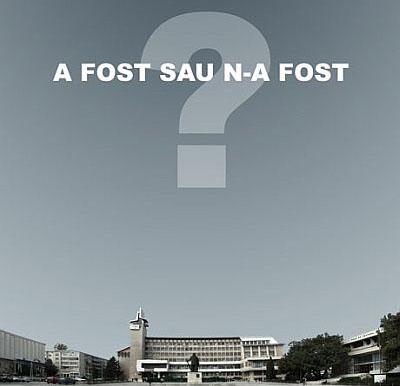 12:08 East Of Bucharest is a comedy directed by Corneliu Porumboiu, set in the small Romanian town of Vaslui. It is one of a handful of recent Romanian films to receive international critical acclaim, including Cristian Mungiu's Four Months, Three Weeks, & Two Days.

The film is divided into two distinct halves. First, we are introduced to the three central characters on a typical morning. There is a TV host, trying to book guests for his cheap talkshow; later, he pretentiously introduces the show with quotations from ancient philosophers. Then a henpecked history teacher, who drinks too much and owes everyone money. Finally, a lonely old man, who is busy buying a Father Christmas costume so he can entertain school-children. The teacher and pensioner will be the only guests on the TV host's talkshow.

The second half is taken up entirely with the talkshow, and is filmed by the TV studio's camera. The show's topic is: was there a revolution in Vaslui, or not? Anti-Communist demonstrations led to Romania's self-appointed leader Nicolae Ceausescu fleeing Bucharest by helicopter at 12:08 on 22nd December 1989. The talkshow takes place on the sixteenth anniversary of Ceausescu's downfall, and hinges on a debate about when the population of Vaslui began demonstrating.

The teacher maintains that he was part of a small group of people who shouted anti-Ceausescu slogans in the town square before 12:08, though all of the show's callers disagree with him. Defending himself against accusations that he is a liar, he repeatedly recounts what happened in the town square, adding extra information each time. The callers (including an ex-guard, with all the best lines, who exposes the show's inadequacies) all offer their own different versions of what took place. As in Rashomon, objective truth remains elusive.
Categories: film reviews
continued...