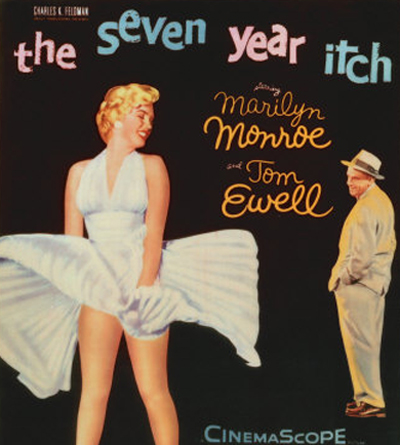 The Seven-Year Itch is a comedy directed by Billy Wilder, starring Marilyn Monroe and Tom Ewell. Like all 20th Century Fox productions of the period (the mid-1950s), it was filmed in CinemaScope. Wilder would later direct Monroe in his fantastic Some Like It Hot.

Ewell plays Richard Sherman, a New York publisher whose wife and son go on holiday for the summer. Monroe's un-named character sub-let's the apartment above Sherman's, and he fantasises about seducing her while his wife is away. In the earlier play of the same name, they do have an affair, though in the toned-down film version he is only unfaithful in his imagination. (Some of the fantasy sequences are parodies of popular films, such as From Here To Eternity.)

At the start, the premise is laboured a bit too much, with repeated emphasis on Sherman's regular office job and normal marriage, and several references to the New York wives who apparently all go on summer vacations without their husbands. It seems a bit strained, as if it were attempting to normalise an unrealistic scenario.

There's a bit too much of Ewell, who narrates the story and appears in every scene, though when Monroe appears she is sensational. She has some great lines, such as recognising classical music because "there's no vocal". This film also contains Monroe's most famous scene: standing over a subway grating, her skirt billowing above her waist. (A similar scene was filmed by George S Flemming and Edwin S Porter for What Happened On 23rd Street in 1901.)

A nude photograph of Monroe had been published by Playboy the year before the film was released, and in an interesting parallel, Monroe's character had also previously posed for a cheesecake photo. In an even more blatant in-joke, Sherman, discussing Monroe's character, says "Maybe it's Marilyn Monroe"!
Categories: film reviews
continued...