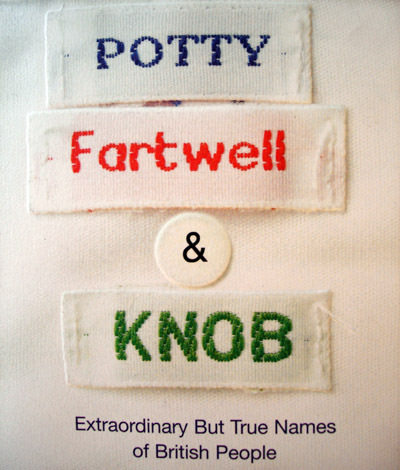 Potty Fartwell & Knob: Extraordinary But True Names Of British People, by Russell Ash, is a pre-Christmas, stocking-filler book. Ash has compiled thematic lists of unusual names, all taken from census records, registers of marriages, and other public documents.

Thus, for example, we learn that there was a man named Jesus Christ who was born in 1940 and died in 2004. My favourite word is given its very own chapter, and the book lists twenty first names and surnames which incorporate it. (Anyone familiar with the English town Scunthorpe will get the general idea; as a personal nomenclature, it appears in even less disguised forms.)

In his introduction, Ash stresses that "wherever possible original documents have been checked" to avoid mistakes, though he also writes that his research involved "access to online material". Exactly how many census records he checked online, and how many he examined in their original versions, is unclear. I'm not convinced that all of the names listed are genuine, as it's too easy for mistakes or spoofs to creep in when records are typed into databases.
Categories: book reviews, the c-word
continued...