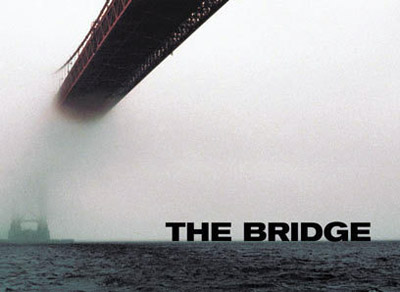 The Bridge is a documentary directed by Eric Steel. Throughout 2004, Steel used remote cameras to film people walking across the Golden Gate Bridge in San Francisco, looking for anyone who was preparing to jump off the bridge. His cameras captured nineteen people as they jumped to their deaths. The film includes footage of these suicides, and interviews with friends and relatives of those who died.

Documentary filmmaking has always raised questions about directorial intervention, though in this case the issue is absolutely fundamental. Steel maintains that, any time he saw someone behaving unusually, he called the coastguard, and that he was thus able to prevent six suicide attempts. One of the film's interviewees, a photographer, explains the detachment he feels when looking through a camera viewfinder, and this has also been explored in horror films such as Cannibal Holocaust and The Blair Witch Project. In The Bridge, the photographer overcame his artistic instinct and intervened to save the life of the suicidal woman he was photographing, and Steel himself is adamant that he did all he could for each of the people whose deaths he filmed.
Categories: film reviews
continued...