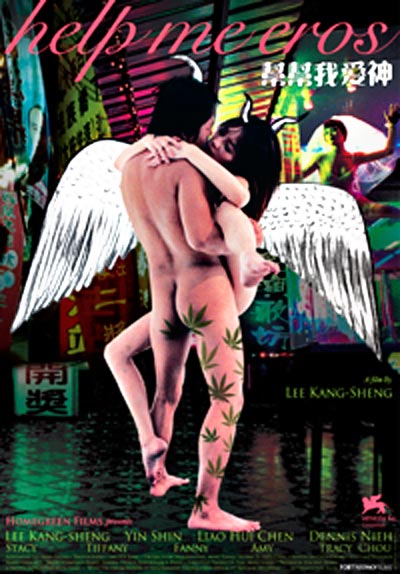 The 5th World Film Festival of Bangkok opened on 25th October and will close on 4th November. Most screenings take place at Esplanade Cineplex. The Festival's main attraction is a sidebar event: Jiri Menzel, one of the leading directors of 1960s Czech cinema, will speak about his classic Closely Observed Trains, at the Foreign Correspondents' Club of Thailand (FCCT) on 1st November.

Taiwanese drama Help Me Eros, directed by and starring Lee Kang-Sheng, is screening on 31st October and 2nd November. Kang-Sheng has acted in several films by Tsai Ming-Liang, and Help Me Eros is clearly influenced by him. Many scenes are filmed with diagonal compositions from a static camera, with the action contained within a corner of the frame, as befitting the film's lonely, uncommunicative characters. There are two clips from a fictional TV cookery show, in which a carp is filleted alive and an unhatched ostrich is fried.

This evening, the great-grand-daughter of Georges Melies introduced a selection of his films at Alliance Francaise, in an event titled Georges Melies: Le Cinemagicien. (It will take place again tomorrow.) Melies was one of the pioneers of cinematic special effects, and although his films have a quaint Victorian charm their technical genius still impresses even now.

Melies's films were accompanied by narration and a piano recital, both performed live, to recreate their original theatrical presentations. The recreation only went so far, however: the mostly expositional narration also included some (slightly incongruous) historical information about Melies, and the films were (disappointingly) screened on DVD rather than the advertised 16mm.

Some of Melies's most famous films were included, such as L'Homme A La Tete En Caoutchouc (in which his head is seen to inflate, deflate, and explode in a puff of smoke) and A Trip To The Moon (one of the first attempts at a sustained cinematic narrative, a series of tableaux in which Victorian astronomers are attacked by spear-wielding natives on the moon). [There are many inaccuracies in the published lists advertising the films to be shown at this event.]
Categories: film screenings, Thailand
continued...