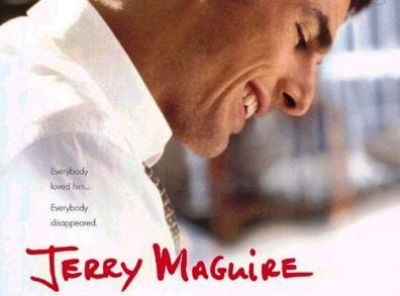 Tom Cruise is Jerry Maguire, a ruthless sports agent who has an epiphany. He writes a long "mission statement", accusing his company of chasing profits at the expense of quality service. Naturally, he's fired soon after, and sets himself up as an independent agent. After his dismissal, he calls his old clients to reassure them that he is still in business, though only Rod Tidwell (played by Cuba Gooding Jnr) sticks with him. (This is the scene with "Show me the money!", one of the most famous lines in contemporary cinema.)

With a single client (Tidwell) and a single assistant (Dorothy Boyd, played by Renee Zellweger), Maguire seems washed up, but all 3 of them are determined to make it work. And, of course, they do. But this is more than the usual love-against-the-odds, anti-corporate-greed story. Renee Zellweger is genuinely moving as Dorothy, Jonathan Lipnicki is great (and never annoying, unlike many child actors) as her young son, and Cruise's familiar cocky smiles are at least in keeping with his character. (He has plenty to be cocky about, of course, being the world's most popular actor. But generally he's better in serious films like Magnolia.)

Cameron Crowe, who hasn't directed anything else this good since, has produced a long (but not over-long) and emotionally rich romantic comedy.
Categories: film reviews
continued...