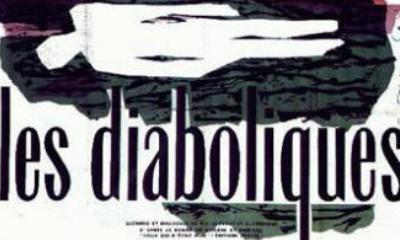 In Les Diaboliques, a sadistic headmaster, Michel, runs a dilapidated school alongside his (literally) weak-hearted wife, Nicole, and his butch mistress, Christina. The two women take solace in each other, and there are hints that they are lovers themselves. Michel seems to mistreat both women, though he reserves most of his cruelty for Nicole, forcing her to eat the rotten fish he serves as a school dinner.

Christina convinces Nicole that they should murder Michel, though she is initially reluctant. She pours him a glass of spiked whiskey, then has second thoughts and tries to stop him drinking it, spilling it on his shirt in the process. He slaps her because of her clumsiness, and this is the final straw: she gladly pours him another large measure. (As in Psycho, the audience's sympathies are drawn to quasi-murderous characters.) Christina drowns the sedated Michel, and they dump his corpse in the school swimming pool, though when the pool is drained his body has vanished...

Les Diaboliques is extremely Hitchcockian, with its convoluted murder plot, a naturally suspicious policeman, and high suspense. In fact, Alfred Hitchcock was reportedly concerned that director Henri-Georges Clouzot had stolen his thunder. The novelists Boileau-Narcejac, who wrote Celle Qui N'Etait Pas (the basis for the film), followed it with From Among The Dead, written specifically to appeal to Hitchcock's sensibilities; he took the bait, and based Vertigo on their novel. His film Psycho was perhaps an attempt to up the ante and confirm/reassert his position as 'master of suspense'.

Les Diaboliques climaxes with one of the most famous suspense sequences in horror cinema. At the end of the film, a caption-card urges the audience not to spoil it for future viewers by revealing the final twist (just as lobby posters later implored audiences not to reveal the ending to Psycho). Suffice to say that contact lenses are utilised to disturbing effect, and anyone who has seen the lurid bathroom scene in schlock classic The Tingler will recognise identical character motivations and a similar modus operandi.
Categories: film reviews
continued...